Very few places in the world offer such opportunities to photograph a big cat roaming free in the wild, and in a landscape as amazing as Patagonia. The legendary South American puma loves the astonishing wildlife of Torres del Paine National Park in Chile, attracted by the area’s large population of guanacos and hares. That means that one of the greatest predators on Earth can show up anytime in broad daylight while we’re hiking in this wilderness and admiring, for instance, the so-called Cuernos (“horns” in Spanish), a 6,900-foot (2,100-meter) rock formation rising over the plains.

Located between snowy peaks, subpolar forests and the Patagonian steppes, Torres del Paine National Park holds the mark of one of the world’s most photogenic natural reserves and a top wildlife destination. This photo tour has the staff and the know-how to take a small group of photographers deep into this southern Chilean countryside to track the great mountain lion surrounded by dazzling landscapes.

From the moment of your arrival in El Calafate – Argentina, one of the strategic gateways to access our favorite region in Patagonia, there is no shortage of monumental glaciers, giant rocks, turquoise-blue lakes and flowery fields. Amidst the dramatic scenery of the Andes, Paine offers different types of strategically-placed lodging, selected according to each journey’s goal. 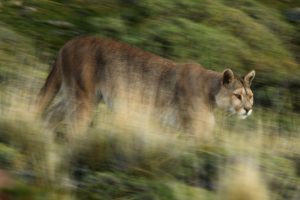 Plenty of other animals can be spotted during the expedition. Andean condors, grey foxes and guanacos are some of the most common. The list also includes nandus (birds that look like Darwin’s rheas), southern crested caracaras, culpeos, austral pygmy owls, upland geese, swans, Chilean flamingos, Humgoldt’s hog-nosed skunks, large hairy armadillos, pig nosed opossums and even the endangered huemul deer, threatened with extinction.

The exhilarating encounters with the pumas usually take place on private land, where restrictions are not as rigorous as inside the park. Led by a team of experienced guides accustomed to tracking the pumas by watching their lairs and behavior over the years, photographers can stand just a few yards from a puma as it plays with its cubs, quietly sleeps under a bright blue sky or feeds on prey it has just captured. The staff is constantly on the lookout for the right place and time to get the best pictures – we try to always be outdoors in the oblique morning light, for example.

During the expedition, each photographer develops their own power of anticipation, looking for the best position and correct angle to catch the puma in action. Sometimes it’s possible to see the feline sneaking between the creeping plants and leaping explosively towards a prey that escapes as fast as lightning. As we are in the wild, looking for a special lapse of a second to get a unique image, each traveler has the chance to exercise their quick reflexes in order to reposition the camera in a random, sudden change of circumstances and scenery. 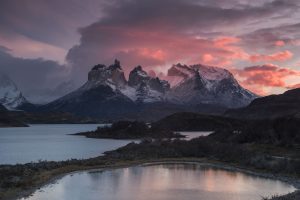 The feeling of being face-to-face with a puma in Torres del Paine is a once-in-a-lifetime emotion. Moving stealthily and in silence with a muscular mass of a body known to stretch as long as 9 feet (3 meters) and weigh up to 175 pounds (80 kilos), the puma is imposing by its presence alone. It seems to freeze anyone who catches its penetrating gaze for a few seconds. Once we finally get the perfect pictures, that instant becomes the unforgettable moment when we faced and photographed the daring puma of Patagonia.

Arrival in El Calafate. Transfer from the airport to the hotel in town for check-in and overnight. Named for the berry that, once eaten, guarantees your return to Patagonia, El Calafate hooks you with another irresistible attraction: Glaciar Perito Moreno, 80km away in Parque Nacional Los Glaciares. This magnificent must-see has converted once-quaint El Calafate into a chic fur-trimmed destination. With a range of traveler services, it’s still a fun place to be. Its strategic location between El Chaltén and Torres del Paine (Chile) makes it an inevitable stop for those in transit.

We’ll visit Perito Moreno glacier in the morning when we usually find good conditions for photography. It’s a nice opportunity to explore and experience one of Argentina’s top attractions. This location into the Los Glaciares National Park offers exceptional views of Patagonia’s most famous glacier, giving you the chance to really appreciate the glacier’s sheer magnitude, as you walk across the wooden walkways along the shores of Lake Argentino. After this morning activity, we’ll drive back to El Calafate where you can explore the city and enjoy some traditional restaurants.

Transfer from El Calafate to Torres del Paine region (around 5 hours driving) for a 4 nights adventure. We will stay in the small town of Cerro Castillo, located in the Chilean side of the border and close to the National Park and the private estancia.

A total of four full days to photograph Pumas, Guanacos, birds of prey, amazing scenery and much more besides, it’s enough time to consider for a Puma photography tour. After many years of Pumas being hunted in Torres del Paine region by farmers trying to protect their livestock, the hunting of Pumas was banned in the park. Since then, with no predators to speak of, and an unlimited food supply of juicy guanacos, the Puma population has been steadily growing.

The biggest threat to pumas is now tourism, and it is our responsibility to ensure that puma tourism is well controlled and monitored. Pumas tend to concentrate their hunting into the period from before dawn until about two hours after sunrise and again from about two hours before sunset until after dusk. We will inspect the puma hunting grounds located in a private Estancia. The area comprised by the northern coast of Sarmiento Lake, Laguna Amarga and Laguna Azul is well known for holding one of the largest concentrations of pumas in the wild. In company of our guide and puma tracker we will follow puma at a prudent distance with the help of binoculars and spotting scopes. Our puma tracking team, already hard at work, will be in radio contact to let us know how they’re doing. Throughout the trip, they will be letting us know the location of the estancia’s most elusive animals including the Andean puma (mountain lion) so that we can head to the sites where they are as soon as they’re spotted. We can also expect to visit caves and shelters where big cats sometimes rest after enjoying a meal.

While we travel around looking for Pumas there will be plenty of opportunities to photograph Guanacos, other mammals, birds and of course the astounding scenery of Torres del Paine. Southern Chile’s high latitude and the Chilean combine rather well for us in that sunrise is quite late in the morning in Chilean Patagonia, so we don’t have to get up at some totally ungodly hour.

After breakfast, we’ll drive back to El Calafate (5 hours). In the evening our guide will prepare a traditional Argentinean barbecue for the group.

Breakfast. Transfer to the airport according to the flight time.