Like a mirage in the eyes of those spotting it from afar, from above, one of Brazil’s most magnificent landscapes, Lençóis Maranhenses (literally “the Sheets of Maranhão”) looks like a gigantic series of white bedsheets sippling in the breeze atop the mountains by the sea. Fortunately, this one-of-a-kind spectacle is real. Located in the sun-drenched and laid-back region of Northeast Brazil, this is a desert of dunes composed of fine, white sands that stand as high as 40 meters (130 feet), extending across 80 kilometers (50 miles) of coastline and stretching about 25 kilometers (15 miles) inland – all of them interspersed with green and blue lagoons.

The park’s variety of ecosystems ranges from dunes to mangroves, covering a perimeter of around 155.000 hectares of preserved area. To photograph this ever-changing landscape at its best, you have to come at the right time of year, find the best light of day and have good local guides with you on your visit to the area – either on 4×4 vehicles, boats or on foot. The SouthQuest team has been exploring Lençóis Maranhenses National Park for many years, having learned the tricks to determine the best routes depending on the time of the year and purpose of the journey. 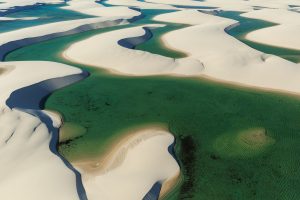 Our quest for the best photo compositions and angles begins in the small town of Barreirinhas, 260 kilometers (160 miles) from the state capital of São Luís. The mixed color waters of the Lagoa Azul (literally “the Blue Lagoon”) and the green waters of the Lagoa do Peixe (“the Fish Lagoon”) are just a couple, but there are plenty of other lagoons and opportunities for photos further away. The most off-the-beaten-path places are like lost oases in the desert, where a handful of families of fishermen live in the middle of nowhere with maybe a few donkeys, goats, chickens and dogs. This is the case of Queimada dos Britos and Baixa Grande, two precious options where SouthQuest expeditions can lead travelers with adventurous spirits.

The Rio Preguiças (literally the “River of Laziness”), which moves slowly from Barreirinhas towards the sea, is beautifully lined by palm trees which produce delicious local fruits such as buriti and açaí. Once in a while, spectacular flocks of Scarlet ibises can be spotted by the river. The flow of the Preguiças carries boats to villages like Caburé, which stands on a strip of sand with the river on the left and the sea on the right. One of the area’s most interesting points for shots is the Farol de Mandacaru, a 35-meter (115-foot) lighthouse with dazzling contours and backlighting.

The tiny village of Atins sits by the river mouth close to the lagoons known as Poço das Pedras and the Lagoa do Mário, beautiful with its floating plants. The town marks the starting point of Grande Lençóis Beach, a region that extends 100 kilometers to Travosa, an isolated fishing village at the other side of the park. It’s where the dunes finally give way to the sea. Tourism hasn’t gotten there yet, so this is a great opportunity to view the simple life and culture of the fishermen of Lençóis Maranhenses. 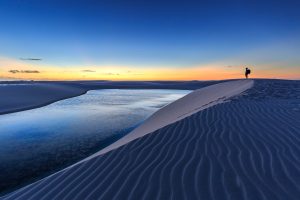 The rains from January to May are essential in the composition of the landscape. They fill up the lagoons and then stop from June to September – the perfect time period to photograph the place –, forming a unique ecosystem on the planet. The winds are also responsible for redesigning the landscape, resulting in a scenery in Lençóis that varies from day to day. When the sun is high in the sky and the light is no longer so favorable, it’s time to stop for a snack, a dip in the refreshing lagoons and a rest in a hammock in the shade of the palm trees, until the sky at sunset invites you to bask in more of the bright colors of Lençóis Maranhenses.

Arrival at São Luis airport (SLZ). Transfer to the hotel, check-in and overnight. The city as a whole has a markedly Afro-Brazilian tinge to its culture, from a lively reggae scene to the highly colorful Bumba Meu Boi festivities. The trip across Baía de São Marcos to Alcântara, an impressive historical town slumbering in regal decay, is an added reason to extend your stay in São Luís. São Luís sits at the northwest corner of the 50km-long Ilha de São Luís, which is separated from the mainland only by narrow channels.

Today we will visit the World Heritage-listed historical center of São Luís, an enchanting neighborhood of steamy cobbled streets and pastel-colored colonial mansions, some handsomely restored, many crumbling. It’s a charming area with a unique atmosphere and one of the Northeast’s best concentrations of museums, galleries and craft stores. Lunch will be served in a traditional local restaurant.

After breakfast, we depart for Barreirinhas (5 hours driving), our base for the next days and one of the main gateways to Lençóis Maranhenses National Park. Barreirinhas is a large, hot service with a fairly pleasant setting if you seek it out. The Rio Preguiças meanders elaborately around the town’s west, north and east, giving the place several separate riverfronts. A few steps from the main street of Av Joaquim Soeiro de Carvalho is the pedestrianized Av Beira Rio; it’s Barreirinhas’ most important riverfront and the main boat-departure point.

Full day dedicated to explore the dunes and lagoons of this paradise. Morning visit to Lagoa Azul (Blue Lagoon). In our private 4×4 vehicle we will take a bumpy ride to the foot of a medium-sized, smooth-sloped dune. In wet season, the guide is likely to walk the group through a circuit of four to five lagoons, but everybody congregates at the start (the highest point) for watching the amazing scenario. Here the individual lagoons are prettier. After lunch and some rest, it’s time to visit Lagoa Bonita (Beautiful Lagoon). Another 45 min drive take us to the foot of a high, steep dune (there’s a rope to help you up). In wet season, we use to walk through a circuit of three to four lagoons, but everybody congregates near the Brazilian flag at the start (the highest point) for watching the sunset. Compared to Lagoa Azul, there are great panoramic views of white sand dunes as far as the eye can reach. You can swim in the crystal clear waters of the lagoons between photo shoots of the changing landscape along with the light conditions.

The Lençóis Maranhenses are spectacular, even more so if you have the opportunity to view the entire park through a overflight. An optional tour this morning is the thirty-minute flight to see and photograph from above this unique landscape in the world. Only on a plane to get a sense of the magnitude of the Lençóis Maranhenses. Overflight happens in small aircraft, which allow a slower and contemplative flight.

Later departure to the Beira river and take a speedboat to Atins through the Rio Preguiças, an environmentally protected area. During the course of the trip, take time to appreciate the landscape of the typical mangrove vegetation, as well as the animals and birds of the region. The first stop is in the community of Vassouras (Pequenos Lençóis, where there is a preservation of guariba monkeys), followed by Mandacaru (the Preguiças Lighthouse, where you can enjoy a beautiful view of the park), and Caburé (a beach that is divided from the river and the sea). Our last stop is Atins, a small fishing village on the coast of Maranhão, a state high in the Northeast of the country.

Atins is remotely tucked away in between the dunes of the Lençóis Maranhenses National Park, the delta of the Rio Preguiças and the Atlantic Ocean’s coastline. The village is a vast stretch of cottages sparsely lined up along a number of sand tracks just a few hundred meters recessed from the beach protecting the inhabitants from the thrust of the winds and an ever changing sandy coastline. The sandbanks sculpted by these winds and the sediments carried by the Rio Preguiças form a natural lagoon, sheltering the beaches from major swell and waves whilst providing ideal conditions for kiteboarding.

For the adventurous traveller, Atins is much better a base camp for the Lençóis Maranhenses than Barreirinhas, due to its proximity to the dunes and direct access to the sea. The villagers make their living primarily from fishing in the sea and working the small plots of lands for a short period of time following the rainy season. Everything and everyone in Atins moves slower and so does time itself.

Full days decided to exploring the region according to your interest. In this area of ​​the national park we have different options for activities as detailed below:

Landscape Photography
A few minutes from Atins we find the most varied locations to practice landscape photography between the dunes and lagoons of the region. Sunrise and sunset provide different experiences and scenarios with the chance to record truly unique scenes.

Fauna and Flora
Lovers of fauna and flora will be more than happy with the presence of numerous bird species in Atins and its region including the famous red ibis or Guará. They feed exclusively on red crabs, hence their color. This trip by boat on the river and the dune takes about two hours and can be organized on the same day.

Trekking and Horseback Riding
Discover the Lençóis Park from Atins on foot, riding horseback or by 4×4. We’ll adapt your program based on the water level of the Lagoons for trips of half a day to three days. The three-day trek on foot through Queimada dos Britos until Santo Amaro will be a pinnacle of your visit. You’ll stay overnight at native houses in oases, but be advised that a 70km walk in the sand requires some preparation!

In the morning we will take the boat back to Barreirinhas. We will enjoy the delicious local food having lunch at one of the riverside restaurants. Then, we will drive for about 5 hours to São Luis.

Breakfast and transfer to the airport.