Some of the wildest habitats in the world.

This place harbors some of the wildest, least impacted habitats in the Amazon and the world. It is on the short list of “must-see” nature destinations in Peru and South America. Tambopata is a river, a province and a national reserve. It is reached through the gateway city of Puerto Maldonado and is directly adjacent to another great nature destination: the Bahuaja Sonene National Park. And, Tambopata shares visits with two other good destinations of the Peruvian Amazon: Manu and Iquitos.

When travelers come to Tambopata, they usually visit the Tambopata National Reserve and the areas around it. The reserve is enormous, protecting 274,690 hectares (1,061 square miles) of pristine wilderness. To give you a sense of just how big that is, it’s about the size of the iconic Yosemite National Park in the United States. It contains great habitat diversity, from old-growth Amazonian rainforest to bamboo groves, from floodplains and wetlands to oxbow lakes to palm swamps. 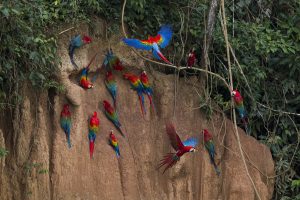 Thanks to this variety of well-preserved habitats, the lowland forests and tropical savannahs of Tambopata are some of the most biodiverse areas on the globe:

Join an extraordinary rainforest wildlife tour on to the amazon a remarkable place, full of lush growth and life. In fact, it seems at times as if the forest is pulsating with life, with a constant background buzz of monkeys and birds chattering, and the gentle thump-thump of armies of leaf-cutter ants marching single file along endless tracks.

Upon arrival from Lima or Cusco, we will welcome you at the airport and drive you ten minutes to our Puerto Maldonado headquarters.  While enjoying your first taste of the forest in our gardens we will ask you to pack only the necessary gear for your next few days and leave the rest at our safe deposit. This helps us keep the boats and cargo light. Skirting Puerto Maldonado, we drive 20 km to the Tambopata River Port, entering the Native Community of Infierno.  The port is a communal business. The 45 minute boat ride from the Tambopata Port to Posada Amazonas will take us into the Community’s Primary Forest Private Reserve. Upon arrival, the lodge manager will welcome you and brief you with important navigation and security tips.

A twenty-minute walk from Posada Amazonas leads to the 30-meter scaffolding canopy tower. A banister staircase running through the middle provides safe access to the platforms above. From atop you obtain spectacular views of the vast expanses of standing forest cut by the Tambopata River winding through the middle. Now and then toucans, parrots or macaws are seen flying against the horizon, or mixed species canopy flocks land in the treetop next to you.

Tres Chimbadas is thirty minutes by boat and forty-five minutes hiking from Posada Amazonas. Once there you will paddle around the lake in a catamaran, searching for the resident family of nine giant river otters (seen by 60% of our lake visitors) and other lakeside wildlife such as caiman, hoatzin and horned screamers. The lake provides wonderful opportunities to photograph majestic trees, water reflections and if we are very fortunate animal life. Although otters are frequently seen, the distances at which they are sighted usually do not make for good photography.

The one hour and forty-five-minute boat ride from Posada Amazonas to Refugio Amazonas will take us past the Community of Infierno and the Tambopata National Reserve´s checkpoint into the buffer zone of this 1.3 million hectare conservation unit.

Photography at the Farm

The farm is one of the few places where light will not be a problem. Ideal for photography of birds who like open areas in addition to colorful fruits and plants.

Two hours  deep in the Tambopata National Reserve we will stop at the Chuncho claylick. After a brief walk (~5 minutes) we will have the chance to see dozens of large macaws feeding on the special sodium rich clays of the riverbank. The Chuncho claylick probably attracts more large macaws than any other claylick in the world and the sight of dozens of macaws taking flight is truly unforgettable. The details of our stopover will depend on the weather and the amount of macaw activity, as the birds don’t visit the clay lick when it is raining.

Twenty minutes walking from Refugio Amazonas is a peccary clay lick. These wild rain forest pigs show up in herds of five to twenty individuals to eat clay in the late morning. Chances of spotting them are around 15%, but well worth the short hike. Other wildlife also shows up including deer, guan and parakeets.

Help us reveal nature’s wonders, became a scientist and get the chance to discover a new species, there is an amazing world of diversity! We will meet the resident researchers team at the lobby for a brief explanation on the type of specimen we are looking for and how to identify them, they will handle us the material for collecting, we will walk around 15 minutes from the lodge to the light trap where all the diversity of insects we’ll be waiting for us, with our eyes sharpened we will look for the selected species will be looking for and collect them, if we are lucky we will get the chance to discover a new species!

Four and half hours by boat from Refugio Amazonas, in the pristine heart of the reserve, lies the Tambopata Research Center.  One and half hours into our boat journey, as we cross the confluence with the Malinowski River, we will leave the final traces of human habitation behind. Within the 700,000 hectare uninhabited nucleus of the reserve, sightings of capybara, caiman, geese, macaws and other large species will become more frequent.

Upon arrival, the lodge manager will welcome you and brief you with important navigation and security tips.

A three to five kilometer hike will lead us to overlooks commanding magnificent views of the Tambopata winding its way into the lowlands. The forest on this trail, regenerating on old bamboo forest, is good for Howler Monkey and Dusky Titi Monkey.  The overlooks provide excellent panoramic photo opportunities of the Tambopata winding its way down from the highlands. On a clear day, it will even be possible to view and photograph the snow capped Andean peaks in the distance.  At each overlook we will have good chances of encounters at eyelevel at 30-50 yards with large turkey-like birds called guans and chachalacas, or toucans, or macaws roosting on the trees.

On most clear mornings of the year dozens of large macaws and hundreds of parrots congregate on this large river bank in a raucous and colorful spectacle which inspired a National Geographic cover story. Discretely located fifty meters from the cliff, we will observe Green-winged, Scarlet and Blue-and-gold Macaws and several species of smaller parrots descend to ingest clay. Outings are at dawn when the lick is most active. If the river is not swollen, thereby reducing the effective beach area, photographers should have plenty of opportunities to shoot the typical clay lick photographs from distances of 50-100 meters.

Photography in the floodplain forest

This five kilometer trail covers the prototypical rain forest with immense  trees criss-crossed by creeks and ponds. Amongst the figs, ceibas and shihuahuacos we will look for Squirrel, Brown Capuchin, and Spider Monkeys as well as peccaries. TRC is located within this habitat. Photo opportunities for all mammals and birds on this trail will be scant as visibility and lighting are poor and animals timid. Our principal focus will be general rain forest shots as well as portraits of the huge trees that are scattered throughout this forest.

Photography on the Pond Platform

Ten minutes upriver from the lodge is a tiny pond with a platform in the middle. It is a great place for the late afternoon where we whiddle away the remains of the day as we spot waterfowl such as Muscovy duck, sunbittern and hoatzin along with the woodpeckers, oropendolas, flycatchers and parakeets that call this pond their home. Opportunities to photograph these beautiful birds will abound, as the lighting and visibility of the pond is excellent and these birds´ habits are predictable over short periods of time.

Photography around the TRC clearing

We will photograph herps around the TRC clearing: frogs, snakes and lizards.  TRC specialists will have spent the past few days screening the vicinity for encounters with the most photogenic herp species and will have prepared appropriate scenarios. The chicos, our flock of semi-wild, hand reared macaws will provide additional photographic opportunities as they  fly about around the lodge.

Photography from the palm swamp trail

Growing on the remains of an oxbow lake and providing both arboreal as well as terrestrial mammals with fruits throughout the year, the aguaje palms are one of the most important food sources in the rainforest. Demand for these fruits and great conditions for planting rice, makes the palm swamp also one of the most threatened habitats.

We retrace our river and road journey back to Puerto Maldonado, our office and the airport. Depending on airline schedules, this may require dawn departures.