One of the most relevant ornithological discoveries in recent history, the endemic population of the fabulous Lear’s macaw in the sandstone cliffs of Canudos, in the northeastern Brazilian state of Bahia, is the focal point of this unique photography expedition. The community of large, all-blue macaws, located in 1978 by German-Brazilian ornithologist Helmut Sick, attracts nature photographers interested in capturing the birds’ color and form contrasted against the brick red of the canyons in this photogenic Caatinga biome, an ecosystem that only exists here.

Getting the opportunity to photograph the few blue macaws free in nature as they take flight, feed and breed is a once-in-a-lifetime experience. First because these birds are endangered and incredibly beautiful, but also because they resist in a dry, hot and vast region which belongs to the Caatinga. One of Brazil’s six ecoregions, the Caatinga occupies around 10% of the country’s area and is extremely rich in biodiversity and endemic species, despite the initial appearance of a tropical, desert landscape of shrublands and small, thorny trees that shed their leaves seasonally. 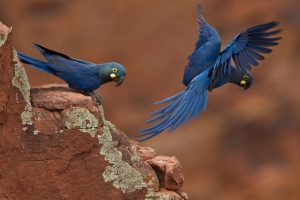 The expedition is an immersion into the last refuge of the Lear’s macaw. In order to approach subtly without disturbing them, our plan is to be prepared to spot them in the dawn’s earliest light. When the sun finally rises, a majestic spectacle ensues with the birds taking noisy flights – always in pairs – over, around and below our cameras. We’re able to observe the Lear’s macaws coming in and out of their nest holes in the red sandstone walls.

Thanks to the great conservation efforts of scientists beginning in the 1970s, the species was downgraded from “critically endangered” to “endangered” in 2009. The population jumped from just 60 Lear’s macaws to 1700 birds according to a recent census in 2018.

The experience of following the Lear’s Macaw’s routine continues as we observe and photograph their feeding habits. They mainly feed on the licuri, produced by the small palm tree species of the same name, and that’s where we go. As many of these trees grow around small villages in the area, this also presents an opportunity to register real life as it still is in the drylands of Canudos, famous as the site of the deadliest civil war in Brazilian history in 1897. Local cowboys, known as “vaqueiros,” dress entirely in leather to protect their bodies from cacti and other thorny trees while riding their horses to drive the cattle and goats on their ranches. 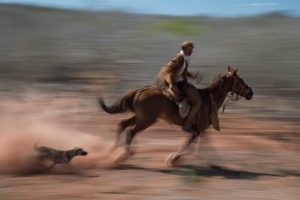 The Caatinga reveals some other wildlife treasures in two great opportunities on this expedition. The first is the chance to photograph the endemic Araripe manakin, which occurs in a limited area that is 200 feet (60 km) long and 1000 feet (300 meters) high in the Chapada do Araripe, close to Juazeiro do Norte, considered a sacred Catholic city in the state of Ceará. Further south, in the Caatinga of Bahia, the dramatic Chapada Diamantina and its Serra do Sincorá mountains welcome nature photographers to spot the Sincorá Antwren and other species. An oasis in the middle of the drylands of Brazil with incredibly pristine rivers and waterfalls, it is also the nation’s number one national park for hiking.

Arrival and meeting with our staff at the airport. Private transportation will take you to Canudos after 3:30h driving. Overnight in Canudos at the Biological Station of Canudos, our base for the next few days. Canudos is known for its history, but it is also home to the Lear’s Macaws, blue macaws that live in the “shallows”, the sandstone valleys where the blue of their feathers contrasts with the red of the sandstone walls.

We will wake up very early for a light breakfast, so at 4:30 AM we will departure to the valley driving around 40 minutes. We will arrive before the sunrise and wait for the first light and consequently the first flights of the Lear’s Macaws in order to photograph them. During three hours we will photograph and observe the macaws with many opportunities in different situations. Around 9:00 AM we will return to the Biological Station for a full breakfast. Time to rest and lunch in the town of Canudos. The afternoons in the Canudos region will be dedicated to photographing the Lear’s Macaws in their feeding areas and also know and photograph a bit of the local culture, its landscapes and the people.

Our day will be dedicated to the transportation from Canudos to the city of Lençóis (600km), our base to visit the region of Chapada Diamantina which means ‘plateau of diamonds’ or ‘diamond highlands’. Diamonds were discovered here in 1844 and the rush of prospectors and miners founded many of the small towns and hamlets that skirt the area.

The scenery is magnificent. The mountain plateaus of the Chapada Diamantina rise quickly in a long and impressive line, marking a first great barrier to the flat plains of the sertao that stretch away to the Atlantic ocean. Formed of ancient sandstones that date back to the time when South America and Africa were joined, the high plateaus are riven with deep valleys between sheer escarpments.

Our day will be dedicated to visiting two of the most incredible places in the region:

Cachoeira do Mosquito (Mosquito Waterfall): Located 40 km from the city of Lençóis, this place has a unique beauty. The name refers to the small diamonds called ‘mosquitoes’ that were found there. Excellent for landscape photography.

Morro do pai Inácio: the main tourist spot of Chapada Diamantina and also the most stunning landscape. Reaching 1,150m altitude, Morro do Pai Inácio is definitely an unmissable visit and provide incredible opportunities for photography. On this visit there is a great chance to photograph the hooded visorbearer, an endemic specie of this region.

We will leave Lençóis and drive for approximately 100 km to our destination, the Poço Azul. It’s a cave with crystal blue waters, and is one of the most popular routes in the Chapada. You can swim, or rather float, in this hypnotizing cave. This underground pool was the scene of paleontological studies in 2005 when they found more than 3,000 fossils of prehistoric animals, which makes it the largest submerged paleontological site in Brazil. This grotto has an underground river with an intense blue color. Between February and October the sun comes in and illuminates the blue water of the place, providing a spectacle for photography.

After breakfast, transfer to the airport of Lençóis. Here we can take the flight back to São Paulo or Rio and connections.